It has been 50 years since the UN adopted Resolution 242, calling for Israel to withdraw from the occupied territories. 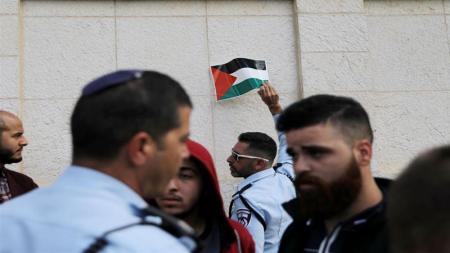 The United Nations Security Council adopted Resolution 242 on November 22, 1967, calling for the “withdrawal of Israeli armed forces from territories occupied in the recent conflict”. It emphasised “the inadmissibility of the acquisition of territory by war and the need to work for a just and lasting peace in the Middle East in which every State in the area can live in security”.

While all parties ultimately accepted the resolution, it took two decades for the Palestine Liberation Organization (PLO) to do so. The PLO criticised the resolution for viewing Palestinians only as refugees, and not as a people with national rights.

Al Jazeera spoke with Palestinians to find out how they view Resolution 242 a half-century since its adoption.

“UN Resolution 242 lays the cornerstone for Israeli policy to call for its legitimacy without actually moving forward towards a just peace. It epitomises all UN resolution efforts, to lay in the dustbin of history as Israeli violations continue.

“Instead of imposing any real consequences on acts of war and violent land annexation, the resolution merely stands as a futile effort to insinuate that the UN has principles. They never enforce their resolutions, as we clearly see in the Palestinian case that has gathered numerous resolutions for its benefit, and, still, we continue to be occupied and violated daily.

“The resolution was an attempt to garner support from the Arab states to agree to Israel’s legitimacy, despite its colonial strategies, instead of conjuring genuine agreements of peace, justice and dignity. Palestinians are hardly even mentioned in the resolution, which plays into Israel’s hands, further isolating Palestinians and dealing with them as a people that don’t exist.”

“It’s a resolution that ended up very sadly and most unfortunately legitimating Israel’s illegal takeover of Palestinian land. Between the period of before 1948 and in the period between 1948 and 1967, the Israelis ended up taking more land than had even been allotted to them under the partition plan. Resolution 242 begins the process of legitimating this takeover of land.

“Some people say that Resolution 242 only refers to the West Bank and Gaza … Others, myself included, say, actually, the definition should be much more expanded to include all of that land that Israel took, even in violation of the partition plan.

“The problem with Resolution 242 is the way people are interpreting it; they’re only focused on the West Bank and the Gaza Strip … not at all focusing on the original takeover of land that happened in violation of international law and in violation of even the UN resolution calling for partition.

“We have a whittling away, eating away or erosion of the principle that conquest is not allowed in international law. And it seems that the Israelis have been given the message that not only is conquest allowed, but even post-1967, as we see more and more settlements being built and expanded, that the world is also turning a blind eye to that.”

“When 242 was issued, it was within the context of what we call the setback, or Naksa, which ushered Israeli hegemony in the Arab World.

“It, therefore, cannot be the basis of any negotiations that will lead to justice and peace in the Middle East.”

“The resolution itself opened the way for the Israelis to make the 1967 boundaries disputed and not [considered as] a Palestinian or international line. [Since then], the Israelis started their settlement projects in the West Bank and East Jerusalem and created huge facts on the ground. No one can ask them now to remove these facts, simply because there are around 750,000 Israeli settlers in the Palestinian territories.

“[The Israelis] are … drawing the border deep inside the Palestinian territories and are turning the Palestinian communities into isolated ghettos, while opening the land for settlers to build houses, settlements, factories, farms, etc … The Israelis are paying no attention to the international resolutions and are implementing their own resolutions on the ground.”