Walid Qaoud died of cancer after he was repeatedly denied entry to Israel for refusing to collaborate with authorities. 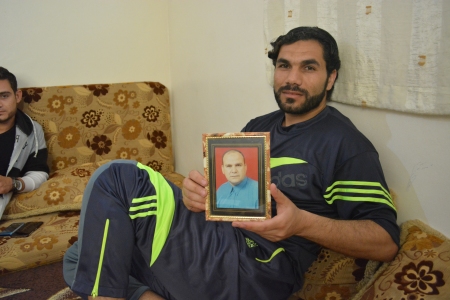 For Gaza’s patients, ‘the only way out is through the Erez crossing, and the authorities are abusing them’ [Mersiha Gadzo/Al Jazeera]

In November 2015, Walid’s doctors at the Augusta Victoria hospital in occupied East Jerusalem detected cancerous cells in his right lung – but it was in the early stages and was still curable, they told him.

That day, on his way back home to Gaza, Walid was detained at the Erez crossing for six hours. According to Al Mezan Center for Human Rights, he was strip-searched and forced to stand in a stressful position, balanced on one leg while facing the wall.

Authorities then ordered him to sit down and stand up continuously – a painful experience, especially as he had previously undergone surgery for colon cancer, Walid’s brother, Adnan, told Al Jazeera. His stomach consequently stiffened so much that it felt like a steel plate.

When he could no longer bear the pain, a group of armed officers then asked him to pinpoint his home on a map. He did, but when they started showing him photos of people from his neighbourhood, asking him to identify them and provide more information, he repeatedly refused.

One officer kept jabbing fingers into his stomach. “Why is your stomach hard like this? Do you feel pain?” he asked.

Feeling ill and exhausted, Walid vomited and fainted. The officers eventually let him go home, but from then on, his application for an exit permit was rejected each month that he applied.

Since Gaza lacks adequate medical resources to treat patients – especially those suffering from serious illnesses such as cancer – they are regularly referred for treatment in Israel or the occupied West Bank. A piece of paper permitting their exit from Gaza can determine whether one lives or dies, but for many, obtaining this golden ticket depends on their willingness to submit to Israeli coercion.

Four months after his first interrogation at Erez, authorities called Walid back in. After waiting for eight hours, he was brought into a room where authorities again showed him photos of people – including some of his neighbours – and asked him to identify them. Walid refused.

“We allowed you into Israel for treatment,” the officer told him.

“Yes, thank you,” Walid answered, according to his family’s account of the conversation.

“We know your sons are part of the resistance. We need you to bring your sons to Erez,” the officer demanded. “We’ll give them breakfast here and pay for transportation.”

“My sons don’t have anything to do with the resistance. Some of them are ill,” Walid answered.

“Bring them to Erez, and we’ll let them go to Israel for treatment,” the officer persisted.

“If you don’t bring your sons, we won’t give you the exit permit; we’ll reject it again,” the officer told him.

“I’d rather die in Gaza than bring my sons to Erez,” Walid told his family upon returning home after spending 15 hours at Erez, noting that it was clear his sons would have been arrested upon arrival.

The Shin Bet did not respond to Al Jazeera’s request for comment on the case.

“We aren’t part of any resistance or political party or active on social media,” Muhammad told Al Jazeera from their family home in Khan Younis.

Although his father remained hopeful and kept applying for an exit permit for more than a year, it was always rejected, Muhammad said. Seeking other options, Walid made the difficult journey through the Rafah crossing to Egypt with his son – but instead of undergoing urgent treatment, they spent a month and a half dealing with bureaucratic red tape and unprepared hospitals. By then, the cancer had spread to Walid’s brain and bones.

“He came back in a worse condition than when he left,” Walid’s wife, Khadija, told Al Jazeera. “We’ve reached a point where it’s best to just stay home if you’re ill because you can’t get treatment anywhere; not in Gaza, nor in Israel nor Egypt.”

According to Al Mezan, Israel regularly uses coercive tactics against Palestinian patients in need of exit permits for treatment. Since 2007, Physicians for Human Rights Israel (PHRI) has documented this practice of extortion, with patients asked to provide information or to serve as collaborators in order to obtain a permit from Israel.

In all 20 cases documented by PHRI in 2015, patients were asked to provide information about relatives and neighbours, including whether they belonged to political organisations.

“Israel is unethically and immorally exploiting the medical needs of Palestinian patients, making their transit for medical treatment conditional on Israeli Security Agency questioning, in order to squeeze them for intelligence,” PHRI stated in a recent report.

Most of those called in for questioning are cancer patients, “as their lives depend on being able to go out for medical treatment. Furthermore, these diseases involve prolonged rather than one-off treatments, making it easier to subject these patients to a whole battery of extortion measures and pressures,” PHRI stated.

IN PICTURES: Using art to heal – Battling cancer in Gaza

According to the World Health Organization (WHO), around 200 patients are called in for interrogation every year.

“For these patients, the only way out is through the Erez crossing, and the authorities are abusing them; it can also be described as torture in many ways. It’s unacceptable,” PHRI spokesman Ran Yaron told Al Jazeera. “For not providing information or for not collaborating with security services in Israel, it’s a death sentence.”

Israel has denied that such interrogations are used to collect intelligence, contending that they are meant to assess the danger of patients. This was also the state’s response when PHRI filed a petition with the High Court of Justice in 2007.

PHRI has a success rate of 61.7 percent in reversing Israeli authorities’ initial refusals of exit permits for Palestinian patients, and the organisation says this indicates “that the rejection of applications is not necessarily motivated by ‘security’ reasons to start with, but by political considerations”.

A former employee of the Israeli intelligence in 2014 published a testimony to explain how all Palestinians are exposed to non-stop monitoring by the “Israeli Big Brother”.

“We knew the detailed medical conditions of some of our targets, and our goals developed around them,” he wrote. “Any information that might enable extortion of an individual is considered relevant information. Whether said individual is of a certain sexual orientation, cheating on his wife, or in need of treatment in Israel or the West Bank – he is a target for blackmail.

“The Israeli public thinks that intelligence work is only against terrorism, but a significant part of our objectives are innocent people, not at all connected to any military activity … We did not treat those targets any differently than we did terrorists.”

Of the 2,600 permit applications submitted by patients to exit Erez last December, only 42 percent received approvals – the lowest approval rate recorded by the WHO since April 2009.

Last March, Walid received a phone call from Erez authorities requesting that he come for another interrogation.

“The authority said that if he doesn’t come by himself, we won’t give him the exit permit,” Khadija said.

But by then, Walid had lost the ability to move and talk. He could no longer recognise family members. His health had deteriorated so much that there was nothing further doctors could do.

On May 2, 2017, after a year and a half of attempting to get proper treatment, Walid died in his family home.

“What happened to Walid could happen to anyone, because the only way we can get treatment is through Erez,” Adnan said. “Israelis control Erez; they control Palestinian lives.

“They told him, ‘Give us what we need or else you’ll die in Gaza’. Israel is fully responsible for the premeditated killing of my brother.”