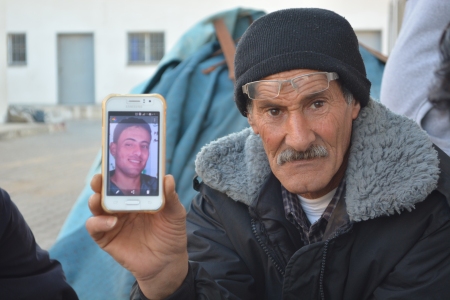 Gaza City – On the windy evening of January 4, 33-year-old fisherman Muhammad al-Hissi had an instinct that he wouldn’t be coming home this time after fishing.

“I’m afraid. If I turn off the lights, please come to me quickly. Don’t forget about me.”

These were Muhammad’s last words to his relatives as they set out to the sea for their evening catch, his cousin Nihad al-Hissi explained, as he recounted the story for Al Jazeera from Gaza City’s port.

Muhammad was feeling uncomfortable that night and wary of the Israeli navy that regularly patrols the sea. He asked his younger brother Wael to switch boats with him in order to stay further away from the six-mile nautical border.

In Gaza, fishing is risky business. In 2016, there were 126 incidents when the Israeli navy fired at Palestinian fishermen and their boats; 12 fishermen were injured that year according to the Palestinian Centre for Human Rights (PCHR).

There were also seven cases of shelling at fishermen’s boats. It’s common for shootings and arrests to occur even when fishermen remain within the Israeli-imposed six-nautical-mile limit. All three of their boats were within the designated area for the Palestinian fishermen, Nihad and Wael explained to Al Jazeera.

Wael agreed to switch and stayed in the third boat closest to the six-nautical-mile border.

Muhammad stayed further away in the second boat at five nautical miles while Nihad and the rest of the al-Hissi family remained at four nautical miles. They were all about 200 metres away from Israel’s southern border.

While they were casting their nets, the waves pushed Nihad’s boat across the border area. The Israeli navy vessel came and began circling around Muhammad’s boat. It was a windy night and the waves were so strong that they overpowered the generator on Nihad’s boat, shutting down the lights.

“When that happened, the Israelis suspicioned us immediately. The Israeli ship started to move in a really crazy way towards [Muhammad],” Nihad said. “I was standing in my boat and suddenly, I heard a lot of explosions.

The 60-ton ship rammed into Muhammad’s wooden boat and crushed it just like a rock that’s dropped on an egg, Nihad explained. Palestinian fishermen and the Israeli navy searched for Muhammad for three days, but his body was never found. The boat’s electric generator may have dismembered his body.

“Israelis in their media said it was a mistake, but it doesn’t make any sense for us. How can these kinds of mistakes happen when they have the best technological capabilities in the whole world?” Nihad asked.

“The Israelis are experts in understanding the sea; they knew how difficult it was to control the boats, how horrible the weather was that night. They [the Israelis] intentionally killed him.”

An Israeli army spokesperson wrote in an email response to Al Jazeera: “A Palestinian fishing boat deviated from the designated fishing zone in the northern Gaza Strip. As part of operational procedure, a navy vessel was dispatched.

According to an investigative report released by the Fatwa and Legislation Office in Gaza, Muhammad’s boat had searchlights that could be seen clearly from 11 nautical miles away. The report accuses the Israeli navy of deliberately sinking the boat, killing Muhammad and urges the United Nations and Security Council to intervene.

IN PICTURES: Gaza fishermen – A life under attack

“Some stories from Israel in the beginning, they confirmed that the captain of the Israeli gunboat was drunk and that they were sailing very fast,” said Shaheen Khalil, a PCHR researcher. “We even heard from eyewitnesses that it was very clear that [the Israeli ship] sailed directly towards the Palestinian boat.”

In the al-Hissi family’s apartment, Muhammad’s mother Najat caressed his framed photo, tears streaming down her face. The family had already been struggling financially but Muhammad’s death made matters worse for his wife and three kids.

“The kids drink salty water [from the tap],” Najat said, explaining that they can’t afford drinking water. “It’s very hard for me. We can’t get his death certificate because they couldn’t find his body. We have nothing to prove that he’s dead,” she said.

Without a death certificate, the family has no hope of receiving any kind of financial compensation.

Ninety-five percent of Palestinian fishermen in Gaza live below the poverty line, living off of loans and humanitarian aid to survive. “We earn 10 shekels a day, maybe less than that,” Wael said, explaining that their income varies. “For four months, we didn’t earn a single shekel.”

According to B’Tselem, an Israeli rights group, Israel has decimated Gaza’s fishing sector due to severe restrictions on sea access, fishing exports and entry of raw materials into Gaza as well as harassment of fishermen.

In 2000, Gaza had about 10,000 fishermen. Today, the number has dwindled to some 4,000 registered fishermen, breadwinners for 50,000 people. But B’Tselem says even this figure is misleading since half of the registered fishermen are unemployed because their boats can’t be repaired due to a shortage of raw materials.

Under the Oslo Accords, Israel is obligated to permit fishing up to 20 nautical miles, but this has never been implemented; the widest range Israel has allowed is 12 nautical miles. The limit reduced over the years; at times it was at as little as three nautical miles. The shrinking fishing zone has led to overfishing in a small area, depleting fish breeding grounds.

It’s why Gaza’s fishermen constantly race each other to the strip’s northern sea border off of Beit Hanoun where the best fish can be caught in the calmest waters. There is not enough space for everyone and fishermen often have no choice, but to go over the border to fish and race back when the Israeli navy appears, Wael and Nihad explained.

B’Tselem’s findings show that fishermen are arrested even when they’re within the permitted fishing zone. According to testimonies, Israeli soldiers have forced fishermen at gunpoint to take their clothes off and swim over to navy vessels regardless of the weather. They are then interrogated in Ashdod while blindfolded and handcuffed.

“Sometimes, when we’re even far away from the border, the Israelis come whenever they want,” Wael said. “It’s as if they’re playing with us; [as if they want to say] ‘even when you’re not near us, we can come and circle around you’.”

“Muhammad was not the first nor the last one to get killed by the Israelis,” Wael said. “We will do everything we can in order to earn an income just to live. It’s very dangerous but the situation is very hard. Even if they close everything in front of us, we will do whatever we can. We have to earn money to live.”