Pakistani protesters chant anti-NATO slogans, during a demonstration to condemn U.S. drone strikes in the tribal areas, in Multan, Pakistan. A drone strike in Pakistan’s tribal areas killed several suspected militants early Monday, Pakistani officials said, as the U.S. pushes ahead with the controversial drone program despite Pakistani demands to stop. The strike was the seventh in less than two weeks. (The Associated Press)

With Donald Trump’s election in the U.S., many have been expressing nostalgia and praise for President Barack Obama — but he won’t be missed by people trying to live peaceful lives in countries targeted by his drone strikes and perpetual warfare.

If we examine Obama’s policies, how different is he from Trump or his predecessor George W. Bush?

Bush is largely remembered for launching a “war on terror” against Iraq and Afghanistan, while Obama has been criticized for his anti-war rhetoric and for being too weak. But Obama is in fact the Drone King and has launched more wars than Bush.

Under Obama, the U.S. has bombed Afghanistan, Iraq, Syria and Libya with drones striking in Yemen, Pakistan and Somalia — all Muslim majority countries. He launched more drone strikes in his first year in office than Bush in both of his terms combined.

Defending himself against allegations that he’s a weakling, Obama the Nobel Peace Prize winner boasted about the number of countries he’s bombed in a speech on Aug. 5, 2015, at American University in Washington, D.C.:

“As commander-in-chief, I have not shied away from using force when necessary. I have ordered tens of thousands of young Americans into combat.… I’ve ordered military action in seven countries.” (The seven above, but there are eight if we also count the Philippines).

These wars have only led to the rise of ISIS and an increase in terrorist attacks that continue to spread. 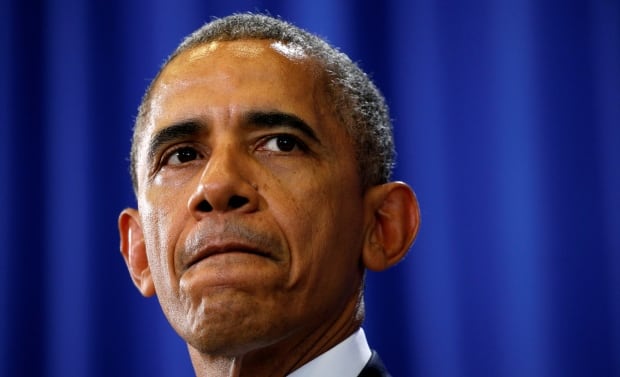 Obama signed kill lists every Tuesday authorizing extrajudicial assassinations. According to the human rights organization Reprieve, drones have executed some 4,700 people without trial.

Obama’s administration released information on civilian casualties from drone strikes on Friday afternoon before the July 4 weekend (great timing); it didn’t even specify which countries were included. The U.S. estimated that between January 2009 and December 2015, a total of 64 to 116 civilians were killed.

But civilian organizations all came up with much higher figures. The Bureau of Investigative Journalism, for instance, estimates that in the same period, 256-633 civilians were killed in Pakistan alone.

Considering that high-level targets are only two per cent of the total fatalities in drone strikes, with evidence of attacks on wedding parties and mourners at funerals instead of terrorists, the figures provided by the latter are more likely.

Men aged 18 to 65 are viewed as legitimate targets, not civilians. The Guardian reported in 2014 that attempts to assassinate 41 men killed an estimated 1,147 people.

A report by the Stanford and NYU School of Law says, “In the United States, the dominant narrative about the use of drones in Pakistan is of a surgically precise and effective tool that makes the U.S. safer by enabling ‘targeted killing’ of terrorists, with minimal downsides or collateral impacts.

“This narrative is false.”

When Hina Rabbani Khar, Pakistan’s former foreign minister, was asked why anti-American sentiment in Pakistan was among the world’s highest, Khar’s answer was succinct: drones.

Before 9/11 there was one suicide bomb attack in Pakistan, Khar said in an interview. From 2004, when the U.S. launched its first known drone strike until 2016, the number increased to 510 suicide attacks.

Much of Obama’s popularity stemmed from his campaign promises to close Guantanamo Bay and to end the wars in Iraq and Afghanistan. They remain broken promises.

Today around 10,000 U.S. troops still remain in Afghanistan and the Taliban control more land than they have since 2001, when the U.S. invaded. The war since 2001 has killed around 104,000 people, the Brown University Watson Institute says; more than 31,000 have been civilians.

The biggest recipient of U.S. weapons is Saudi Arabia, which is waging a devastating war in Yemen. Human lives don’t matter when Lockheed Martin and Boeing have deep pockets to fill. 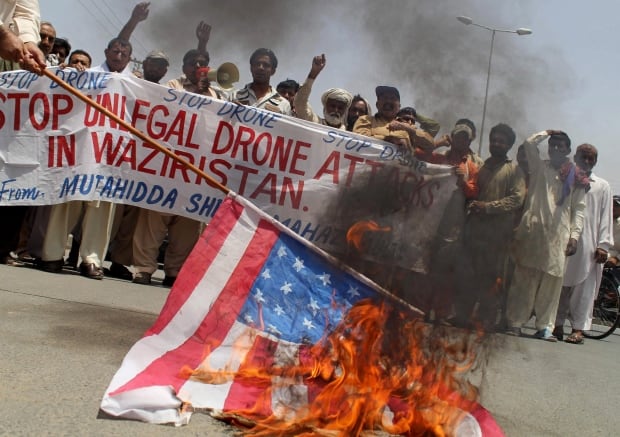 Pakistani protesters burn a representation of a U.S. flag to condemn a drone attack in the Pakistani tribal area of Waziristan which killed Taliban leader Waliur Rehman, Thursday, May 30, 2013 in Multan, Pakistan. (M. Abbass/The Associated Press)

During his candidacy, Obama criticized the expensive price Americans pay for war. Yet after his election, more money was spent on war than during Bush’s presidency ($866 billion and $811 billion respectively), as journalist Edward Delman remarked.

The cost of war in Iraq, Afghanistan, Pakistan and Syria amounts to $4.79 trillion and counting, the Watson Institute reports. Yet there is no money for basic health care and U.S. citizens resort to crowdfunding to pay for their cancer treatment while residents in Flint, Mich., still do not have clean water.

Trump’s idea to start up a registry for Muslims is not a new one nor is Islamophobia. Throughout Obama’s presidency, Muslims continued to be registered on no-fly lists without any explanation, watched in mosques and on university campuses, abused and held without any charges in Guantanamo Bay.

The FBI created its own Islamic terrorists by preying on vulnerable, mentally unstable individuals and setting them up in fabricated sting operations.

All of this has been happening with little resistance and now Trump has mainstreamed these already-existing policies.

The main difference between Obama and Trump is that the latter talks without a filter. Obama is handsome, charismatic and has a great sense of humour, which is why many oblivious, privileged folk will miss him. Yemenis, Pakistanis and victims of the “war on terror” most likely won’t.