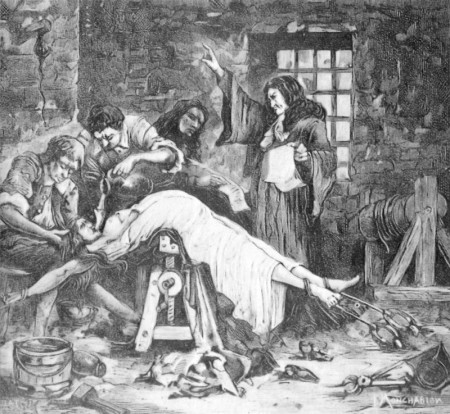 “It has nothing whatsoever to do with the Government of Canada,” Prime Minister Stephen Harper said in Parliament.

There’s a reason why he ignored the question. The facts tell us that Canada is complicit in the torture of detainees and has been doing everything it can to cover its dirty hands.

The Iacobucci 2008 inquiry confirmed that Canadian security agencies were complicit in the overseas torture of innocent Canadians Ahmad El Maati, Abdullah Almalki and Muayyed Nureddin – a fact that Canada has tried to cast doubt on.

El Maati was on his way to his own wedding in November 2001 when he was arrested by Syrian intelligence officers at the Damascus airport. He was detained underground in a dark coffin-sized cell and was tortured until he “confessed” to a plot to launch a suicide attack in Canada.

CSIS shared unfounded allegations that these men were al-Qaeda linked terrorists. At the request of CSIS, El Maati spent more than two years languishing in Syrian and Egyptian jails.

The inquiry cleared their names but they haven’t received any redress. With the exception of Maher Arar, no former detainee has received any redress to date. No one in Canada or in the detaining country has been held accountable for their reckless actions.

Arar, arrested in 2002 at John F. Kennedy airport, was beaten regularly with shredded cables and held in solitary confinement for nearly a year in a Syrian prison. The Syrian government later stated that Arar was “completely innocent.”

The 2006 O’Connor inquiry found that U.S. agents took Arar to Syria to be tortured based on unfounded information supplied by the RCMP (Canada’s national police force).

A decade ago the Canadian government cited a man named Abu Zubaydah as a source in court documents against two suspects arrested in Canada, Moroccan immigrant Adil Cherkaoui and Mohamed Harkat, from Algeria.

Zubaydah is repeatedly mentioned in the scathing 6,000 page Senate report. He was the CIA’s guinea pig, brutally tortured even though interrogators knew he had any information.

Described to be compliant like a trained dog, Zubaydah identified Harkat and falsely claimed he operated a guesthouse for mujahedeen travelling to Chechnya. Zubaydah said he recognized Charkaoui from a photo interrogators showed him and said he’d seen him in Afghanistan.

Zubaydah was waterboarded 83 times in a 17-day period and was kept in isolation for 47 days.

Yet, the Canadian government claimed the information provided by Zubaydah was “obtained freely and without constraint” when it issued security certificates against Harkat in 2002 and against Charkaoui in 2003.

By issuing these Kafkaesque certificates the government can arrest and indefinitely detain non-citizens without charge, based on secret trials and evidence.

Harkat spent one year of his 3.5-year detention in solitary confinement and is still under house arrest today under strict surveillance.

As his wife Sophie Lamarche Harkat explained, he was basically “transferred from one prison to another.”

Post 9/11, five Muslim immigrant men have been detained in Canada under the certificates, spending nearly 30 years combined in jail and five years in solitary confinement, a form of psychological torture that violates international law.

Charkaoui was cleared in 2009 when the government withdrew evidence after requested to reveal more information. He hasn’t received an apology either.

On June 1, 2012, the UN Committee against Torture (UNCT) found Canada to be “complicit in torture” of Muslim men in post 9/11 and requested Canada to stop transferring prisoners to other countries where they’ll likely endure torture. It’s also illegal under Canadian law to do so.

The UN condemned its use of secret evidence against suspects and Canada’s practice of handing prisoners over to Afghan security forces. Canada has not lived up to its obligations as a signatory of UNCT, it said.

Instead of complying with the UN’s recommendations, the situation deteriorated even further. About three months after the UN’s report, the Harper government quietly rubbed salt into the wound by issuing a directive, giving government agencies the authority to use and share torture-tainted information.

This came to light only through the access to information law.

In November of that year, the government further ignored the UN by introducing Bill C-42, which forbids RCMP members from questioning the use of illegal torture-tainted information with threat of dismissal.

The Senate at least had the minimal decency to release the report to the public, detailing torture’s inefficiency, but documents in Canada remain censored and clouded in secrecy.

There are 40,000 pages of Afghan detainee records detailing Canada’s role in the torture of detainees at the hands of Afghan officials.

In 2011, 4,000 pages were released, but they were heavily blacked out, making many records unreadable.

The Canadian government has shown little respect for human life.

Today, El Maati’s life is still ruined. The 50-year-old still bears physical and psychological scars due to beatings and electrical shocks endured to his legs, back and genitals, at CSIS’ request. Today he remains unemployed and crippled, finding it difficult to move.

The 2012 UN report recommended Ottawa to compensate El Maati, Almalki and Nureddin, but Canada refuses to do so.

Their lawsuits have dragged on for eight years now; a trial date has been set for September 2016.

“The government cannot run away from that date. We have hope that there will be light at the end of the tunnel, that there will be closure,” El Maati said. It’s vital that Canada owns up and stops its brutal violations of human rights. The truth always surfaces in the end; it’s just a matter of time.