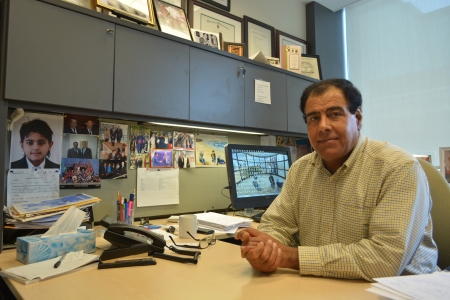 Dr. Izzeldin Abuelaish is on a mission to bring 100 wounded children from Gaza to Canada for treatment with the Heal100Kids campaign

“It was as if people there were waiting in line to be killed,” Dr. Izzeldin Abuelaish explained, describing life for Palestinians living in the besieged Gaza Strip this past summer.

“No one can imagine what I saw there. The wounds, the people, the destruction, the damage,” Abuelaish said sitting in his office at the University of Toronto. “It’s our children, mothers, girls; it’s life that is damaged.”

Scenes of bombardment and blood are all too familiar with Abuelaish. In 2009, Israeli shells killed his three daughters – aged 21, 15 and 14 – and his 17 year-old niece while they were doing their homework in their bedroom in Gaza.

Instead of becoming embittered, Abuelaish wrote the praised memoir: “I shall not hate: a Gaza doctor’s journey,” which calls for peace and dialogue between Israelis and Palestinians.

His response made headlines and won him humanitarian awards from around the world, which fill the walls of his office at the University of Toronto where he is now a professor in global health. Photos of his children and family adorn the room.

Born and raised in the Jabaliya Refugee Camp in the Gaza Strip, the Hebrew-speaking infertility specialist spent years treating patients and saving lives in both Israel and the occupied territories.

Toronto has been his home for the past five years, but Abuelaish returned to Gaza during the last week of the summer’s conflict to be with his family.

Having witnessed the death and destruction yet again, Abuelaish decided to do what he could to help and created the Heal100Kids campaign in late July. He’s calling all Canadians to help bring 100 seriously wounded children from Gaza to Canada for medical treatment.

“The world is accountable. What makes evil flourish is for good people to do nothing,” Abuelaish said confidently.

According to the UN, 140 families were partially or completely annihilated in Gaza by Israeli attacks during the 50-day conflict. Over 2,000 Palestinians were killed and scores of families were left homeless overnight.

Among the 11,000 wounded Palestinians, 3,400 of them are children of whom 1,000 are now permanently disabled. 375,000 traumatized children require immediate psychological care.

Many of them need surgery to have any hope of recovery, but hospitals in Gaza were ill equipped even before the summer’s conflict began.

The Heal100Kids online petition launched on change.org in late July has garnered over 43,000 signatures and quickly received support from five pediatric hospitals, the Registered Nurses Association of Ontario, the Ontario Provincial Health Ministry, parliamentarians and leaders of both federal opposition parties.

The plan is to bring children who are not critically ill and are in stable condition to travel to Canada. A family member will accompany them for support.

Physicians have agreed to donate their time and expertise and travel and accommodation will be covered by community fundraising.

Countries such as Germany, Austria, Turkey, Great Britain, Belgium and Egypt have already taken in dozens of Palestinian children for treatment.

It’s all set to go except for one remaining obstacle – convincing the Canadian federal government, led by Conservative Prime Minister Stephen Harper, to issue visas for the children and their family members.

Abuelaish says he’s sent three letters asking to meet the Minister of Foreign Affairs John Baird, but has yet to receive a response.

Adam Hodge, Baird’s spokesman told the Middle East Eye in an email that while they “applaud the humanitarian instincts of those who want to assist victims of Hamas,” it’s better for victims to receive treatment at home with their family, since travel is medically risky. Canada is helping Palestinians by providing funding to the World Food Programme, Hodge explained.

“Make no mistake, there is only one party responsible for the suffering of the Palestinian people, and that is the international terrorist group Hamas.

“Hamas’s reckless aggression continues to put Palestinian lives at risk by impeding the delivery of humanitarian assistance to Gaza.”

“I feel sad, honestly with this language. They’re politicising [the issue]… Canadians know who wounded these children and it’s not a matter of blaming but [a matter of] what can we do.

“When I treat a patient, when anyone comes to any hospital in Canada, even if he is a criminal, even if he killed someone, I don’t ask. As a hospital, we treat him as a patient, as a child. And then the legal system and justice will take its place,” Abuelaish said.

Some have questioned Harper for supporting some initiatives while ignoring others. Last month Harper attended the United for Ukraine fundraising gala in Toronto, which raised money to send Canadian physicians to Ukraine.

At the gala Harper announced that Canada would be providing “protective medical and logistical equipment to help the soldiers of Ukraine defend their territory.”

Earlier in the year Baird also announced that Canada would provide funding for equipment, supplies and medical care for Ukrainian activists.

Canadian journalist, Andrew Mitrovica explained in his op-ed for ipolitics.ca, that Harper offers his unequivocal support in sending doctors to Ukraine and pledges to “help those who survived,” yet disregards Palestinian children who survived bombardment.

“To Harper, those kids are just Hamas sympathizers, if not terrorists-in-waiting – every one of them. In his perverse geopolitical calculus, those kids are mere pawns in a PR campaign to make the Israelis look bad. Their suffering is all Hamas’s fault. De facto: To help any of those kids would mean helping Hamas and Harper would never do that,” Mitrovica wrote.

Even though the Canadian government hasn’t announced any commitment regarding the Heal100Kids’ proposal, Abuelaish remains optimistic and says he’ll continue to try to reach government officials to negotiate the case.

“As a father and a physician, despite the pain I have witnessed and experienced, I do not give up hope,” Abuelaish wrote in an op-ed in the Toronto Star newspaper.

“As long as the patient is alive, as the wounded children in Gaza are, hope is part of the physician’s job. Health care has the potential to be a catalyst in the peace process, to remind us of our shared humanity, the preciousness of life and the possibility of salvation.”

Lauren Lowe, a high school teacher in suburban Toronto who launched the petition on change.org after reading Abuelaish’s op-ed, says she’s considering delivering the petition to parliament in Ottawa once they reach 50,000 signatures.

“We would only be transporting children who are stable… the reasons they came up with were not valid,” Lowe said.

Since 1979 the government has allowed foreign children to come to Canada to undergo life-saving surgeries through the Herbie Fund. 684 children from 102 countries have received specialized treatment at Toronto’s SickKids hospital. For each case Citizenship and Immigration Canada have provided visas for the children and their families to enter Canada.

Many children in Gaza have become disfigured, requiring orthopaedic, vascular, neurologic or plastic surgery, prostheses and rehabilitation. Abuelaish is determined to help them receive treatment in Canada so they can become independent individuals.

As he talks about his life and experiences in Gaza, one thing is clear- Abuelaish is passionate about helping humanity- religion, ethnicity and race don’t matter.

In his office, among the plethora of diplomas, awards and family photos decorating his office, stands an orange banner with a drawing of Mahatma Gandhi. The quote reads: “An eye for an eye makes the whole world blind,” which could easily stand as the epitome of Abuelaish’s lifelong peaceful humanitarian efforts.

“These children are victims of violence and conflict. That’s what he [Baird] needs to understand. Instead of blaming, we need to take responsibility to treat these children and to see them as humans.

“It’s time to heal these children and to speak the truth… By the end of the day I am sure, humanity will prevail and the truth will never be hidden forever,” Abuelaish said.