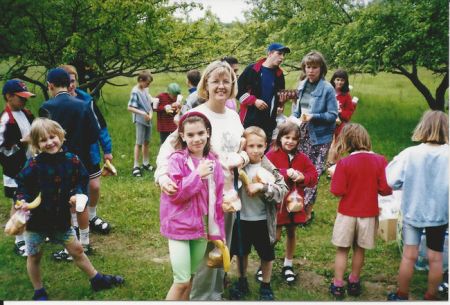 Laila Craddock and the children take a quick break during their road trip from Kiev to the summer camp in Crimea a few years ago.

Thanks to Devon’s Laila and Gordon Craddock, hundreds of Ukraine’s less fortunate were provided a chance over the years to escape from their difficult realities and experience swimming in the salty waters of the Black Sea for their very first time.

As part of the Craddock’s 15-year-old humanitarian organization Heart4Children Canada, the popular annual summer camp has been held since 2005 at their Mercy House Outreach Centre property in the village of Popovka by the black sea in Crimea.

Orphans, disabled children and needy families were delighted to be able to spend their vacation here.

Many of the families arrive from isolated villages around Chernobyl, which is notorious for its catastrophic nuclear explosion in April 1986. Many of its residents still suffer from high rates of birth defects and cancer.

But due to the current conflict in Crimea, the Craddocks had to shut down their Mercy House and suspend their summer camp for the first time.

This summer they’re relocating and will hold the camp in the villages north of Kyiv in collaboration with four churches to provide a vacation bible school.

“It’s not the same but at least they’re going get something this summer,” Gordon said from his home in Devon.

“They need to know that we are not forgetting them. Heart4children is still going to continue to be there to supply, support these families,” Laila said.

The Craddocks have been visiting Ukraine every year since they founded their organization in 1999, which provides humanitarian aid, food, school supplies and medical aid to children in need.

The idea of creating Heart4Children Canada came about after Laila’s uncle, who works at a rehabilitation centre in Ukraine, sent her a video showing the plight of Ukrainians.

“I was greatly impacted by what I saw,” Laila said.

At the time more than 100,000 children were living on the streets of Kyiv, begging.

After the break-up of the Soviet Union, jobs vanished overnight, leaving thousands of parents unemployed, unable to feed their children.

So the Craddocks formed Heart4Children Canada to help the vulnerable youth and partnered up with an orphanage in Kyiv.

Together they distributed food and warm clothes in the wintertime and ran a soup kitchen twice a week for a few years.

Many of the kids were addicted to glue since they sniffed it to stay warm.

“We were with kids at times that the glue smell was so strong that we couldn’t take a deep breath,” Laila said.

Some of the children as young as seven or eight years old were drug addicts and alcoholics.

“To share with you what we’ve done in 15 years, you’re just going to get the tip of the iceberg with some of the things we’ve gone through,” Laila said.

The organization’s activities expanded into distributing Christmas gifts and more than 100 jackets each winter for needy children.

By speaking in churches and at Rotary Clubs across Alberta and British Columbia, and by organizing fundraisers, the Craddocks, with the help of supportive Canadians, have collected more than a $1 million since 1999 to help Ukraine’s most vulnerable.

This past February, the Craddocks were finishing up constructing their guesthouse in Crimea, which would allow more children and families to participate in the summer camp program, but this has been put on hold.

Their friends and partners in Ukraine have been regularly informing them of the situation.

“We are very sad to see what has happened… it’s a real struggle for these people. My heart’s broken for them,” Laila said. “It’s a situation we can only watch.”

They initially planned to visit Ukraine in May, but due to the escalating conflict, they’re unable to return. They’re hoping that by October, the situation will be stable.

Heart4Children Canada is a registered charity with the federal and provincial government. To donate, email heart4childrencanada@yahoo.ca or phone 780-987-2260.Their registration number is 86952 9149 RR0001.