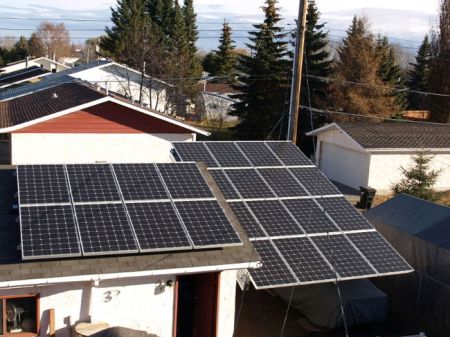 The 24 solar panels installed in Ken Marston’s backyard powers 100 per cent of energy consumed in the household.

When Imperial Leduc #1 struck oil in 1947, Devon became known for discovering one of the largest oil reserves in the world.

But this year, since Nov.1, Devon has placed itself on the map for a whole new reason.

Resident Ken Marston of Athabasca Drive is the new owner of the only solar carport in the entire province of Alberta.

The carport, installed by Edmonton-based company Dandelion Renewables, supplies 100 per cent of energy consumed in his household through a grid-tie system.

Eight solar panels are installed on the roof of his garage, plus another sixteen on his carport roof, which generate electricity from solar energy.

The microinverter, or the “brain” of the power system located inside the garage on the wall, connects the generated electricity through the power line into the house.

During the day, if the panels produce more power than is used, the power is sold back to the energy company and can be bought back at night; storing power and batteries isn’t required.

“It was sort of like a retirement thing instead of buying a GIC (Guaranteed Investment Certificate) because GIC rates were way low, so we put that [investment] in the solar panels instead,” Marston said, explaining his choice in installing a solar carport.

“Since we’re going to get about the same return- we’re hoping for around three per cent- and then if the power goes up [in price], our power will stay the same.”

Schletter, a German company, produced the carport with the solar modules made by Bosch in Germany and other parts of the equipment were built in Ontario.

The design was modified in Arizona, where they customized the carport to be compatible with frost and ground heaves, replacing the original cement blocks with more durable steel pilings.

With electricity bills and distribution charges increasing, using solar power could be a good choice because it can generate up to five per cent of annual return on a low risk investment, according to Mikhail Ivanchikov, president of Dandelion Renewables.

“It’s extremely good if you compare it to a savings account which may be two per cent nowadays, so it’s very competitive. But any investment you do in banking, mutual account, mutual funds, stocks, you actually acquire more risk to your portfolio,” Ivanchikov said.

“For example, if you invest in Canada bonds, government bonds, it’s low risk, but low return… by installing a solar power system, they’re removing the risk out of their portfolio, and for negative risk they get five per cent return which is pretty good in the investment world.”

Alberta’s wholesale electricity prices spiked between April and June of 2012 and 2013, according to a report by the Market Surveillance Administrator.

David Gray, an electricity consultant who worked for Alberta’s Utilities Consumer Advocate told the Calgary Herald in August 2013 that high prices in the future are “the new normal.”

With the abundance of sunny days, Alberta is a great place to use solar energy.

Solar energy also has an advantage over other renewable sources because small-scale installations can be used on rooftops of businesses and homes much like Marston’s. The rooftop also provides shelter for vehicles from rain, snow and sunshine, keeping them ventilated and causing less rust.

Solar energy costs have been continually decreasing over the years as well, Ivanchikov said. As solar energy increases in popularity, more solar panels are produced with improved efficiency. This drives manufacturing costs down making the system more affordable for consumers.

Another factor Ivanchikov believes has been driving solar energy prices down is pressure from the low costs of China’s market. The U.S. implemented high import taxes on Chinese models, closing their market, with Europe following suit as well. Canada however, still competes with Chinese module prices.

Solar power systems can provide clean and free electricity for 40 years. They can still operate well after that, but with a 20 per cent decrease in efficiency.

Devon’s carport has started the trend of creating solar carports in Alberta, with a few more projects following suit in the province and in British Columbia as well, Ivanchikov said.