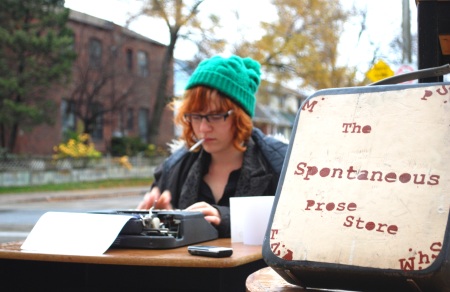 It’s a nice nostalgic feeling hearing the sound of a good old, obsolete object being brought to life in today’s digital age.

The sound is 23-year old Kaile Glick typing away at her 1950s Smith Corona typewriter outside on a street in Leslieville. She writes custom-made prose on the spot for any person who stops by and gives a pay-what-you-can donation.

Sitting at an elementary school style table with a cigarette hanging loosely from her mouth, there are no pauses as she types, creating her 100th and something piece of prose since she started her gig last June.

Her eyes behind the black thick-rimmed glasses don’t look up from the scroll of paper, rolling up her words until the prose is completely done.

A green knit hat sits comfortably on her disheveled red hair. A self-made sign on the table next to her, propped up against a chair reads The Spontaneous Prose Store.

With her work finished, she hands it to Arscott, who smiles while reading it to herself.

“I find it pretty amazing how creative and how much of a story was told in just the beginning of a sentence. She took it to a whole different place,” Arscott said after reading it.

“I think she’s made a little cozy nest that she could create these amazing prose.”

Glick’s typewriter, chair, sign and table create a relaxing nest where her lifelong dream of writing pretty words for money is now possible.

“That was my big dream so I went about it in the most direct way possible,” Glick said, while smoking outside.

Although she does admit she got the idea for The Spontaneous Prose Store while living in San Francisco as a student. She first saw a man at Fisherman’s Wharf operating the store, and thought it was a neat idea.

“If you want a job, you’ve got to treat it like a job. So, I’ve been working hard to just write as much as I can for better or for worse I guess,” Glick said.

It’s not a lot of money, but it’s a start. Most people give her a few bucks, but in Yorkville she gets billfolds- no change. Now she says, it at least pays for breakfast.

Although the writing business is known to be infamously difficult to break into, Glick has shown plenty of creativity and perseverance to pull herself through.

She’s Toronto’s (and Canada’s as far as we know) only Spontaneous Prose Store writer.

Glick first started the store at the corner of Bloor and Brunswick, but after a while went exploring in other neighbourhoods. Setting off with her trusty typewriter on her bike, riding through the streets of Toronto makes her feel like Don Quixote.

“And then it just became an addiction,” Glick said.  “It’s fun to interact with people that way, to challenge myself like that. It’s like travelling without going anywhere.”

It’s opened her to a world of interesting characters right in her very own hometown.

“I came to the parade but I got so embarrassed because I keep getting caught staring at boobies,” is her favourite title ever requested.

A person who looked something like a clown requested it, wearing a blue wig and headgear, who talked in a cute, high-pitched voice, Glick said.

It was during Pedestrian Sunday at Kensington Market. The clown didn’t have any money, so they decided a bag of grapes would be a suitable commodity to be traded for prose.

From the wide variety of prose-seekers who visit her, there have been consistencies among the topics requested.

Cats, love and lust, weird philosophical questions, and even broccoli are all popular.

Glick explained, there are nights when it seems that everyone has broken up, and other nights when people seem to be in the mood for asking abstract questions like, “Who am I?” “How am I not myself?” “What is love?”

But being put on the spot to instantly compose wonderful prose for the strangest of topics within a few minutes would probably be difficult for the average writer.

“It was a response to writer’s block in a way,” Glick explained.  “I write, I guess, deliberate prose. I was working on this project and I got stuck and I was so frustrated and I wanted to write anyways.

Inspired by her creative writing and poetry teacher in San Francisco, Alexandra Teague, Glick says she’s learned how to write, “short little bursts of whatever comes to mind,” which she incorporates in her prose.

“It’s like forget form, forget editing, just write what you feel all the time,” Glick explained. “She [Teague] really taught me the value of both form and editing which really helped me build my skills.”

Glick is taking her Spontaneous Prose Store one step further. Last November, she opened an actual store with the same name at Leslieville’s Arts Market, where she sells second hand books and her custom made prose.

Her anthology of the hundred prose pieces she’s written over the summer on the streets of Toronto is also expected to be published before the New Year.

Reading books and writing poetry defines her life and she’ll strive for it to stay that way.

“I can’t remember ever not loving it,” Glick said smiling.