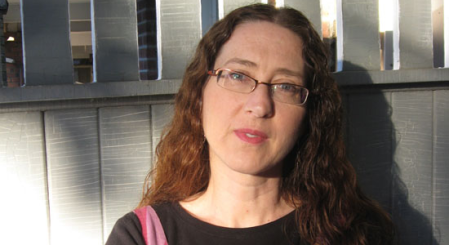 Toronto resident Trish O'Reilly-Brennan hopes her online petition might be able to get Transit City back to Toronto.

When East York resident Trish O’Reilly-Brennan posted a petition online to get theTransit City plan back, she had no idea how quickly it would spread. With minimal promotion, it gathered over 1,600 signatures within a week.

O’Reilly-Brennan said all she did was let a few friends know about her petition through email and Facebook, and the petition took on a life of its own. Currently there are over 1,700 signatures, with a stated goal of 10,000.

“I was really bothered when [Mayor Rob] Ford got up on first day of administration and cancelled Transit City,” O’Reilly-Brennan said.  “I thought it was a really bad decision.”

O’Reilly-Brennan hopes this petition might help bring Transit City back.

The petition requests to bring back Transit City since it provides, as it states, “more transit for less money”compared to Mayor Ford’s new subway plan. It claims cancelling Transit City would cost Toronto a huge amount in cancellation fees and penalties. It also states, in a democracy, an important issue such as transit needs be settled by a vote of the entire City Council and not by a single elected official, such as Ford.

The petition calls for councillors to vote to restore Transit City and for construction to begin without further delay.

“We all love subways, but that ship has sailed, we can no longer afford to put subways everywhere,” O’Reilly-Brennan said.

O’Reilly-Brennan explained the urgency for certain areas in Toronto to be serviced with transit continues to rise.

“A healthy city needs good transport and we’ve fallen behind, so I think Ford’s plan causes us to fall further behind,” O’Reilly-Brennan said.

“I think a lot of people are frustrated,” Giambrone said. “A lot of people have realized that the mayor’s plan on subways isn’t realistic and are beginning to realize that this isn’t going to happen.

“At the end of the day the mayor is only one vote of 45 and it’s up to council to make the final decision,” Giambrone said.

Giambrone explained Transit City is the better option since it covers all corners of Toronto, it’s cheap and construction can be done quickly since all the approvals are already in place.

He believes that as pressure mounts, the issue can be brought before city council.

The National Post previously reported, in cancelling the Sheppard East LRT, Ford gave up $333 million of federal money. This is in addition to at least $49 million that Toronto has to pay Ontario for “sunk costs,” which was already spent on light rail lines before being scrapped by Ford.

“I just don’t understand how anyone could represent that as being a good, rational decision,” O’Reilly-Brennan said, concerning the cancellation fees.

“It seems to me, the most bizarre possible decision.”

O’Reilly-Brennan said the turning point for her in realizing Torontonians could bring back Transit City themselves, was when City Council “discovered its backbone” andoverturned the Port Lands redevelopment issue in late September.

That same month, former mayor David Miller spoke up about Ford’s subway plans in an interview with radio station Newstalk 1010. He said it’s still not too late to build Transit City and it could be turned back on “like a switch.”

“That was the moment I was waiting for,” O’Reilly-Brennan said. “I kept thinking, well, council hasn’t voted on it. Is it actually over?

“Now’s the time to say, wait a minute, what really happened with Transit City? Are the contracts really cancelled?” O’Reilly-Brennan asked.