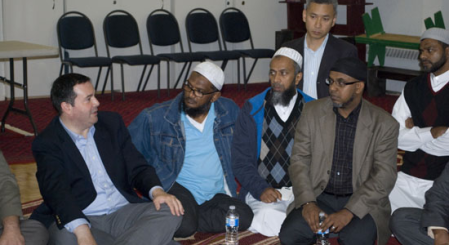 Jason Kenney, MP, PC, Minister of Immigration addressed issues of visas and immigration with the local community at the Masjid Al-Jannah mosque in Scarborough on Oct 1.

Having the bride’s grandmother at the wedding is a must for many families.

Unfortunately, numerous immigrants in Scarborough have had family members miss out on such family celebrations because of visa complications.

This was just one concern shared by South Asians who came to the Masjid Al-Jannah mosque in Scarborough on Oct. 1.  to hear immigration minister Jason Kenney speak.

The long line for immigration is a “big, good problem,” Kenney told them. “There are far more people who would like to come to Canada than we can practically receive in any one time.”

It has been increasingly difficult to deal with the demand as more and more applicants result in longer delays, Kenney said.

The minister was there to endorse the election bid of Progressive Conservative candidate Gary Ellis. Ellis also spoke of local concerns in the community.

Rimzy Kuthubdeen, who immigrated to Canada from Sri Lanka in 2001, said he attended the meeting because he was concerned there have been few Sri Lankan Muslims entering Canada compared to other religious groups from the same country.

“We feel that Sri Lankan Muslims are marginalized to a certain extent because we don’t see [many] coming in here, as opposed to Sinhalese and Tamil Sri Lankans,” Kuthubdeen said.

Kuthubdeen estimates there are only 700 Sri Lankan Muslim families in Ontario.

“We want to make a community among us, [but] we see that we aren’t fully represented,” he said. “We don’t have enough manpower in here [to run the mosque].”

Kenney said there are no quotas based on religion or ethnicity. Entrance rates are based on the largest number of qualified people who apply.

Mohamed Nizam, a retired engineer, who emigrated from Sri Lanka in 2005, also attended the event. After the event, he said he applied for a visit visa two years ago for his sister and brother-in-law to come for a month.  He was left baffled when his application was rejected for the reason that “there is no strong justification for them to come to Canada.”

Nizam explained his brother-in-law was a successful businessman who travelled widely to many European countries but just couldn’t come into Canada.

“We feel that the community in Sri Lanka, the local high commission of Canada, were suppressing applications from Muslims,” Nizam said.

Ellis said he is aware of some of the issues facing the community. As a university professor, he said he’s seen many South Asian students left with no choice but to quit school temporarily in order to work and pay tuition.

“I felt very much like an employment agent rather than a professor, helping them get jobs … that’s what led me into running,” Ellis said.

Unemployment in the Scarborough community is at 9.6 per cent, compared to 6.4 per cent in the rest of Ontario, Ellis said.

He also addressed the issue of sex education in public elementary schools, which has been a concern for many parents. This week Progressive Conservative leader Tim Hudak reportedly stated the Liberals plan to bring in a sex-ed curriculum as early as Grade 1, if elected.

“The parents need to be consulted on how that is done — there has been no consultation done. This has to stop.”

Kenney said the family, not government, is the basic institution of a society,.

“As a Conservative, I respect tradition,” Kenney said. “We respect and don’t belittle people of faith.  We believe parents have a responsibility in raising their children and that can all be completely taken away by the state.” 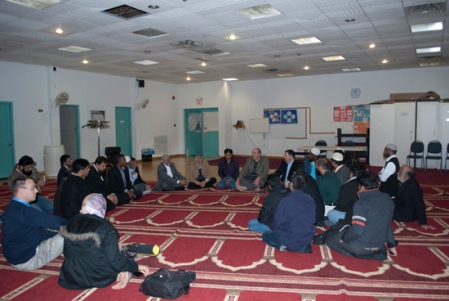 Centre: Gary Ellis and Jason Kenney take a photo with the South Asian Muslim community at Al-Jannah mosque in Scarborough.