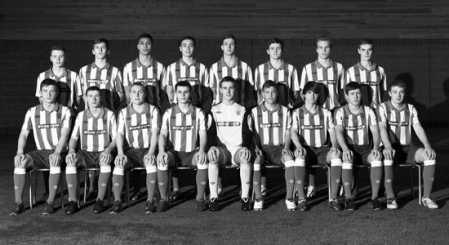 The Rangers fan from Scarborough left for Scotland on Feb. 13 after training for three years with the Markham Lightning soccer club.

Markham Lightning coach Dino Cramarossa says he was lucky to have coached Aird.

“I’m very proud of him. I’m very satisfied,” Cramarossa said. “When you get an athlete that goes on to, hopefully, a professional level, it’s very satisfying.”

The 16-year-old attacking midfielder will join the Rangers’ Under-17 youth squad, which is third in line to the official club after the reserve team and the Under-19 squad.

“I’m very pleased to have signed Fraser,” said Jim Sinclair, director of the Rangers’ Murray Park Academy. “He is a very direct, technical player who appears at this stage to have a combative, competitive style.”

Aird’s early goal will be to adapt to life as a full time athlete, he said. He’ll be training at the same facility as the top Rangers’ squad.

A former Grade 10 student at Albert Campbell Collegiate Institute, Aird showed a passion for soccer at an early age. He joined the North Scarborough Soccer Club when he was just 3, playing with older 5-year-olds.

He played against older kids until he joined the Markham Lightning in 2008.

Aird’s speed with the ball sets him apart from the rest, Cramarossa said.

“To me, he’s gifted,” he said. “He’s one step ahead of everybody at all times.

“He just has a great offensive ability to just be so calm and yet so gifted around the net. That’s what makes him special. That’s something that is very hard to teach in soccer.”

Pursuing his career overseas, Rangers is the third club he’s been on trial with. Aird had a trial in 2008 with Celtic FC and with the Rangers last October. In 2008, he had a trial with second-tier Burnley FC of the English Premier League.

“He’s mentally tough,” Cramarossa said. “He’s a competitor and he just hates to lose. I think that it does not matter what sport he plays; he could play a game of checkers and he wants to win. That competitive instinct in him is alive and well.

“He’ll give it 100 per cent every single game to do whatever it takes to come out on the other end of the scale to win.”