Mississauga mayor Hazel McCallion won yet another mayoral election by a landslide with a 68 per cent margin of victory.

Canada’s longest serving mayor was re-elected for her 12th term as mayor of Mississauga Monday night, winning 76 per cent of the votes, while her main rival Dave Cook won a mere eight per cent. Fifteen other candidates also vied for the position of mayor.

“I feel happy about it,” said McCallion. “I always respect the decisions of the citizens. I’m very pleased.”

Her result of 76 per cent of votes shows a decline of interest in her governance when compared to her previous election in 2006 when she won 92 per cent of votes. But when she arrived at City Hall wearing a royal blue suit and with roses in hand, McCallion still appeared confident as she responded to the media’s questions.

“In light of the six months that the press has been running a daily campaign against me; I think that’s [76 per cent of votes] pretty good,” McCallion said. “Christopher Hume [Toronto Star reporter] said that the city of Mississauga has been rendered brain-dead. Well, today they came alive with the results.”

In the months leading up to the elections, McCallion has been sharply scrutinized by the media, mainly because of her controversial conflict of interest judicial inquiry probing her use of influence to bring a 1.5 billion hotel project deal to downtown Mississauga in which her son had a large financial stake. The inquiry is expected to resume in November.

The mayoral candidates also widely criticized her for not issuing a platform.

“I run a campaign the day after the last election,” McCallion explained. “I don’t wait for an election to come along to campaign. I’m out with my people, I’m available to them, and I answer their calls. I give all. I put Mississauga first in everything.”

One of McCallion’s key issues has been the improvement of public transportation due to residential intensification. In early October 2010, Mississauga’s improved transit system was put in service, with new hybrid buses called “Miway”, which expanded its routes and service hours. The Bus Rapid Transit is also scheduled to commence in late 2012. McCallion said that she plans to invest as much money as possible into public transit in order to lighten up the heavy traffic.

McCallion is well known for her handling of financial matters. Ever since she was first elected in 1978, Mississauga has never had to borrow money and is currently one of the few debt-free Canadian cities. She is the Chairman of the Large Urban Mayors’ Caucus of Ontario (LUMCO) and also works with the Big City Mayors’ Caucus (BCMC) of Canada to help improve municipal situations in major cities across Ontario and Canada, which she plans to continue with Toronto’s new mayor, Rob Ford.

Mayor Hazel McCallion expects to be busy in the next four years. She explained that all municipalities are being challenged financially, but she will strive to get the unemployed back to work and give them some hope for the future. 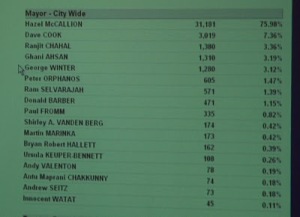 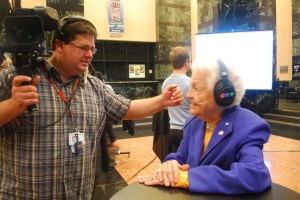